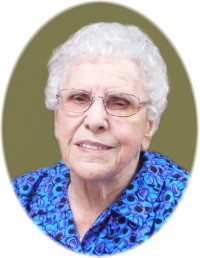 Peacefully, on Thursday 23 April, 2015, Elsie Steiner, aged 87 years, passed away at East-Gate Lodge Personal Care Home in Beausejour.  Elsie was predeceased by her husband William, parents Daniel and Martha Gefreiter, two brothers in infancy, brother Erwin, granddaughter Karen, son-in-law Todd, and brothers-in-law Matt and Fred.  She is survived by her sisters Olga and Margaret, her children Carolyn and Jack, Brian and June, Doris and Gerry, and Rosemary; grandchildren Earl and Lauren, Keena and Rob, Judy and Brian, Jean-Paul, Sara, Trevor; great-grandchildren Emily, Jeffrey, Samantha, Elissa, William, Cayden, and Kaylee; along with many nieces, nephews, and special friends and their children.

Elsa Elfrida Gefreiter was born 4 October 1927, in Poland.  She came to Canada as a young child with her parents.  The family had a farm near Lonely Dale, Manitoba.  Elsa was the eldest of four children.  Eventually she was more usually known as Elsie.  Elsie married William Steiner in October of 1945. They always said that they met at church. They had a farm between River Hills and Seven Sisters where they raised their family.  In 1976, they moved to Beausejour.  As well as farming, Elsie worked in several restaurants as a cook, and at the Beausejour Hospital laundry.

Elsie was a determined and talented person who never stopped doing and making things.  None of us kids can remember Mom without her hands being busy making something.  She knit many sweaters while watching us curl at the curling rink in Seven Sisters.  She won many ribbons at the local fairs.  She shared her knowledge by teaching us at home and by being a leader in 4-H clubs.  She was a perfectionist and insisted on it being done again if it wasn’t just right.  If something caught her eye but she had never seen that technique before, she figured it out.  When computers became common, she said she could never Mom had a strong work ethic.  She couldn’t abide anyone being lazy.  There was always something to be done.  She told Rosemary when she was starting her first job:  “Earn Your Pay”!  Don’t say you were bored, either.

Through all of the life-changing, challenging things that happened in mom and dad’s lives, mom’s strength and connections with people shone.  She was the person you could go to and talk about any problem.  Sometimes you got advice, sometimes just talking about it and a hug was all you needed.  Mom was always active in the community.  It was important not just to go to church but to be a part of the church.  She was involved in many other community organizations. Mom welcomed everyone to be a part of her family.  There was no way that you were going to leave a visit hungry or empty-handed.

Mom’s faith in the Lord was her support throughout her life.  She always read her Bible.  A few weeks after that devastating stroke, she asked Rosemary to open her Bible and read the Twenty-third Psalm several times.

There is a dash between the date of birth and the date of death.  Mom filled that dash with a lot of life, love, and feeling.  That is what we will remember.

In lieu of flowers, a donation in mom’s memory to a charity of your choice or the Resident’s Council at East-Gate Lodge Personal Care Home is appreciated.

Offer Condolence for the family of Elsa Elfrida Steiner