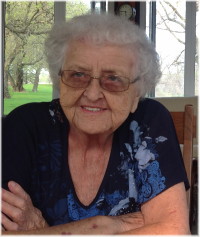 Peacefully on Saturday, October 29, 2016, Elsie Draward passed away surrounded by the love of her family at Beausejour Hospital at the age of 88.

Elsie was born January 27, 1928 in the Rural Municipality of Brokenhead, Manitoba. In the summer 1949, she married her husband of 62 years, Daniel Draward, and lived on the Draward homestead in Lydiatt Manitoba. Together they raised their four children and met the challenges of farm life until they moved to Beausejour in 2006.

Elsie had many loves: Her family, gardening, and cooking. She relished every moment she spent with her children, grandchildren, great grandchildren, extended family and friends. Everyone was welcomed in her home and she was always prepared for visitors with coffee, sweet treats and her amazing cabbage buns. In the summer, her yard was never without flowers blooming and plants heavy with vegetables, all thriving under her green thumb.  In the fall, family and friends were grateful to receive her bountiful harvest which she was more than pleased to share. Even her little garden in Beausejour produced an ample supply of potatoes. Elsie was skillful in making every ounce of her harvest into delectable foods that kept her family going throughout the year. Not only did she produce her foods through gardening and raising livestock and chickens, she gathered berries and mushrooms and helped her husband hunt a few times. Elsie was very resourceful in making her home and caring for her family. She knitted, crocheted, sewed, helped with the operation of the farm and was, as many women of her generation, a practitioner of recycling well before it became common practice.

She was her happiest when she had visitors in her kitchen, a sink full of produce from a day spent in her garden and a couple of pies in the oven. And it was a perfect day if she had all that as well as baby to bounce on her lap and phone calls from her sisters.

Offer Condolence for the family of Elsie Draward