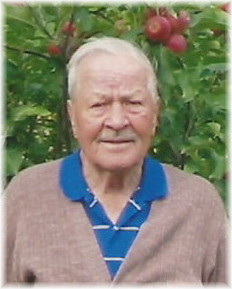 It is with great sadness the family announces the passing of their dad, grandpa and great grandpa, Emil G. Litke, at the age of 92, on January 19, 2016 at East Gate Lodge in Beausejour with his family by his side.

Emil was born and raised in Beausejour.  While he was enlisted in WWII he met and married the love of his life Jean.  The couple moved from Vancouver to Beausejour in 1944 and this is where they raised their family.  Emil was a founding member of Grace Lutheran Church and served as president for many years.  In his retirement he was known for his endless garage sales.  As well, he was an avid gardener and fisherman.

Family was an important part of dad’s life.  He had a close relationship with all of his immediate and extended family.

The family would like to thank East Gate Lodge, Dr. Nick and Pastor Ward Yunker for their care and compassion as well as Sobering Funeral Chapel for their help and guidance.

Funeral Service will be held on Saturday, January 23 at 2:00 p.m. at Grace Lutheran Church, 418 Gertrude Avenue, Beausejour with interment to follow in Beausejour Cemetery.  Viewing will be one hour prior to the service.

Flowers are gratefully accepted or a donation may be made to Grace Lutheran Church.

Offer Condolence for the family of Emil G. Litke