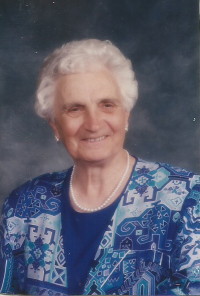 The family is sad to announce that Erna passed away peacefully at the Whitemouth Personal Care Home on Friday, December 14, 2018 of Parkinson’s Disease.  Although she will be greatly missed, she is finally at peace in her heavenly home and is no longer struggling with the disease that changed her and took her from us.

She will be lovingly remembered by:  her daughter Donna and Allan and their family; son Matthew (Jodie) and Draven; daughter Melissa (Dallas), Avery and Mackenzie: her son Ken and Anita and their sons; Brian and Michael (Mae): her daughter Grace and Hari and their family; daughter Joy (Brian) and Chase and son Joel: her son Kelvin and his family; daughter Jamie and Tanner and son Kevin and Annabel.  She is also survived by her siblings Peter (Justina) Penner, Thelma Reimer, Cathy (John) Lerch, Corney (Sondra) Penner and brother in-law John Clairmont and their families, as well as by her cousins.

Erna and her husband Abe spent many years in the Vineland, Ontario area, where they worked and raised their family.  After retirement, they moved to southern Manitoba in April of 1980 and lived in the Barnsley area near Carman.  Erna later moved to Winnipeg and then to the Whitemouth Personal Care Home in June of 2011, where she resided until her passing.

The family is truly grateful for the care our Mother received in the Whitemouth Personal Care Home.  She was treated with respect, kindness and love.  Her needs were met in a manner that preserved her dignity and honoured her personal tastes and wishes.  Her family was shown utmost consideration and respect.

As per Erna’s wishes, cremation has taken place.  A memorial service will be held at 10:30 a.m., Saturday, January 5, 2019 at The Redeemer Lutheran Church in Whitemouth.

If you wish, donations may be made in Erna’s memory to Mennonite Central Committee (MCC), 134 Plaza Drive, Winnipeg, MB R3T 5K9.

Offer Condolence for the family of Erna Friesen