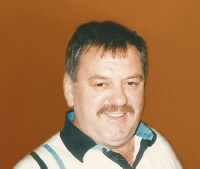 It is with heavy hearts we announce the passing of our husband, father, and grandfather Ernie at the Pine Falls Hospital, where he gave the nurses a good run for their money.

He is survived by his wife Darlene (Pichor); daughters Sharol and Kim (Neil); his one and only granddaughter Chelsea Rae, always the apple of his eye; sister Irene Kemball; brother Ken (Sharon); sister-in-law Shirley Cyr; brothers-in-law Ted Pichor (Cheryl), and Max Pichor (Kathy); nephew and godchild Grant Cyr (Linda) and nephew and godchild Tyler Pichor; and many more nieces and nephews, too many to mention.

Dad was born and raised in Pine Falls, marrying his high school sweetheart at barely 21. They had 53 wonderful years together.  Dad enjoyed snowmobiling, his cottage at the lake, dancing to country music, and he could always get a party going with a “pan”.

Dad worked at Pine Falls Paper Mill for 41 years, and took great pride in being “B Crew Boss”, which he was very good at.

Respecting Ern’s wishes, cremation has taken place.  A private service will be held at a later date.

Offer Condolence for the family of Ernest Cyr