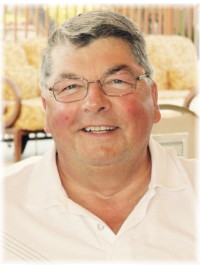 It is with great sadness that we, the family, announce the passing of Ernie Andrew Smelski, husband, father, best friend and mentor. On the 28th of June, Ernie passed away suddenly at his home in Lac du Bonnet.

He is survived by his loving wife Sylvia and son Travis; his sister Josephine Stokotelny and brother Maurice (Verna) Smelski of Dauphin. His mother-in-law Ann Eschuk of Dauphin, his brothers-in-law, Sylvester (Lucy) Nykoluk of Chepen, Peru, Steven (Debbie) Nykoluk of Lac du Bonnet, and sister-in-law Stephanie (Ray) Hadway of Dauphin; and numerous nieces and nephews that all held a very special place in his heart.

He was predeceased by his parents, Andrew and Mary Smelski; his brother-in-law Mel Stokotelny; his niece Beverly Stokotelny and nephew Allan Stokotelny.

Ernest Andrew Smelski was born on April 30th, 1949 at the Dauphin General Hospital.  Ernie started his education at the Mountain Stream School in Keld, MB in 1954. When the school closed, he was bused to Dauphin and continued his education at Smith Jackson and high school years at McKenzie High School.

He started off with Resources as a summer student and found that this would be his lifelong career. He graduated from Maritime Ranger School in Fredericton, New Brunswick and his first posting was in Mafeking, MB.  During his years with Resources, he was stationed in numerous communities throughout Manitoba, ending with retirement in Lac du Bonnet. During the years he made many lifelong friends that he kept in contact with wherever he was stationed.

In 1973, he met Sylvia at a social in Keld and their romance began. They married on August 24th 1974. On July 4th, 1982 their lives become complete with the birth of their son Travis.

He loved to travel with family, and they visited many parts of Canada, United States, and Mexico ending with winters spent in Arizona.

Ernie loved sports and played hockey and baseball in many of the towns he lived in. He danced with the Cossacks starting in 1973 and made so many more special friends. His love for the Ukrainian culture was dear to his heart. His work with Resources led him to join the Snoman organization and continued into retirement.

A Celebration of Life for Ernie will be held on Saturday, July 6 at 1:00 p.m. at the Lac du Bonnet Community Centre.

Funeral Liturgy will be held on Monday, July 8 at 11:00 a.m. at Ukrainian Catholic Church of the Resurrection in Dauphin, MB, with interment to follow in Riverside Cemetery.

Ernie left a very special memory in the hearts of each and every one he touched.

Love and miss you.
Vichnaya Pamyat
You will never be forgotten.

Offer Condolence for the family of Ernie Andrew Smelski