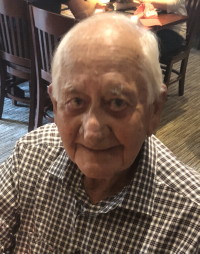 It is with deep sadness that we announce the unexpected passing of our husband, father, grandfather, and great-grandfather, Eugene Lavoie, at 95 years of age, on Saturday, May 11, 2019, in the Pinawa Hospital.

Eugene was predeceased by his son, Brock, his parents, Omer and Maria, his brothers, Edward, Paul, Ephrem, Alcide, and Wilfred, and his sisters Josephine, Amy, Irene, Olive, and Berthe.

Aside from the five years he spent overseas as a veteran of the Second World War,   Eugene resided in Lac du Bonnet, where he grew up, raised his family, and operated his own business, E. Lavoie Construction, for 44 years.  Eugene was always a hardworking man who kept busy his entire life.  He and Hallie enjoyed many winters in their Florida home in West Palm Beach.  Coffee time with his friends at Chicken Chef was a favourite daily ritual.  Eugene’s greatest pleasures were the many family gatherings and he especially loved being around his grandchildren and great-grandchildren.  Family pets, Mercy & Brooklyne, brought Grandpa lots of happiness and joy.

A big thank you to the homecare workers.  He enjoyed their friendship and the good care he received.

A memorial service will be held in the Lac du Bonnet Legion Hall on Friday, May 17 at 1:00 PM.

In lieu of flowers, donations may be made to the Lac du Bonnet Food Bank or a charity of your choice.

Offer Condolence for the family of Eugene Hubert Lavoie