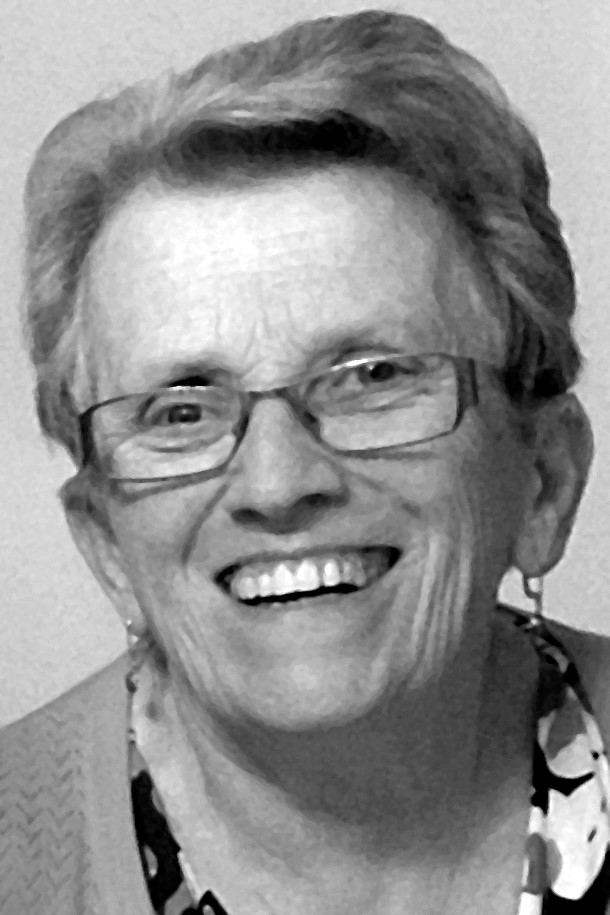 She is lovingly remembered by her husband Peter, children, Hilbert (Diane), Joseph (Sharon), Maria (Sean), Thomas (Rita) and John (Lexine) and five grandchildren.  She celebrated her 40th Anniversary on February 17.

Ev was the seventh of nine children, six of which immigrated from Vroomshoop, Netherlands to Edmonton, AB with their parents, Hilbertus and Neeltje, in June 1954.  Her surviving siblings are Jane, Everdina, Annie, Hendrika (Brian) and Nellie.

She grew up with her sisters both in North Edmonton and at Alberta Hospital where her father worked as the head groundskeeper and gardener.  She graduated from Victoria Composite High School and, later, Grant MacEwan College with a Teacher’s Aide certificate.

She first met her neighbour, Peter, in late 1957.  They re-met when he returned home for Christmas in 1977 from Thompson, MB. They married on February 17, 1979 and lived in Thompson where Hilbert was born. In late 1980 they moved to Pinawa, MB, where four more children were born.

Evelina took great joy in raising the kids, where they were free to explore the town and its outdoors. She lovingly tended her garden with great care and spent time in the late winter and early spring starting seedlings to plant following the thaw. Throughout her life, she enjoyed singing – especially with her sisters – and joined the church choir at the Pinawa Christian Fellowship; visits with her sisters would inevitably leave to impromptu sing-alongs in both English and Dutch. No matter how far away, Evelina’s family was always very important to her; she kept in touch with everyone and would visit regularly. Despite health issues, Evelina maintained her sense of humour and was undeterred from taking care of her family and doing the things she loved.

The family thanks the doctors, nurses and staff at the Pinawa Hospital, CancerCare and Health Sciences Centre.

In lieu of flowers, please donate to your favourite charity.

Mom, your songs will always be in our hearts.

Offer Condolence for the family of Evelina Baumgartner