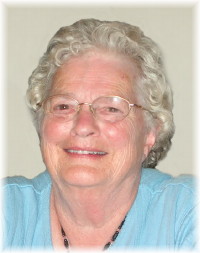 With her loving family by her side, Fay passed away on Wednesday, September 11, 2019 at the Health Sciences Centre, in Winnipeg, at the age of 84.

Fay was born in Saskatoon, and moved as a young girl to North Battleford, where her father was a CN diesel mechanic. Fay and Ray became high school sweethearts while attending North Battleford Collegiate Institute. After school, Fay worked for Saskatchewan Telephone as an operator, first in North Battleford, while Ray attended University in Saskatoon, then transferring to Saskatoon after marriage. They married September 1, 1956 in North Battleford and lived in Saskatoon for Ray’s final University year. Following graduation Ray & Fay moved to Deep River, ON with Atomic Energy of Canada Ltd., here Fay was kept busy with the arrival of their three children. When AECL built a research facility in the Manitoba wilderness the young family became one of the first ‘pioneers’ to the new Town of Pinawa. Over the years Fay volunteered with the Hospital Auxiliary, the Arena concession, taught Sunday School, canvassed for charities and served on the school board. She and Ray traveled the world, both for work and pleasure, with Australia and Vancouver Island as favourite places to visit.

A loving and caring person Fay was always thinking of ways to make others happy. Her homemade pies, cookies, turkey, stuffing and cheese balls were a few of the family traditions. Fay so loved her grandchildren and great grandchildren — one of her greatest pleasures was looking at photos and videos of the kids. She enjoyed her friends, neighbours, her garden, shopping, berry picking, needlework, reading, weekly bridge groups and above all, her family. Fay was a cheerful optimist, who never complained about her health. We will miss her phone calls, ready laugh and her skill at keeping the family connected.

Memorial service for Fay will be held on Saturday, September 14, 2019 at 2:00 p.m. in the Pinawa Alliance Church with Rev. Rob Murray presiding. A private family internment will take place at a later date in Pinawa Cemetery.

In lieu of flowers donations may be made to the Pinawa Hospital Auxiliary or Pinawa Foundation, Box 100, Pinawa MB R0E 1L0.