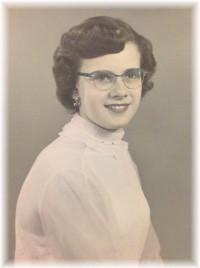 Early on Saturday, October 31, 2015 at the Pinawa Hospital, due to complications related to rheumatoid arthritis, Fran passed away with her best friend and husband David of 56 years at her side.

Parents, Frank and Eleanor Taylor took baby Frances home from the Portage la Praire Hospital to their farm near Katrime after her birth on May 24, 1940.
Fran received her early education in the one-roomed Squirrel Creek School and continued her secondary education at MacGregor High School. After being employed at various office positions she found her true calling in life as a wife, mother and homemaker.
She was united in marriage to David Booth on August 1, 1959.  They made their first home in Minnedosa before becoming Pinawa Pioneers in July of 1963.  In Pinawa they were in on the beginnings of a town they loved and helped it grow along with their two daughters.  This did not mean Fran stayed at home. Her and Dave went on to farm in the Lac du Bonnet area, traveled extensively in North America and made a trip abroad before settling down again, splitting their time between Pinawa and Mission, TX.
Fran will be remembered for creating beauty and fun in her surroundings through her sunny personality, gardening, crafting, art, baking, cooking and most importantly her friendships with the people (and special puppy) that made up her world.

Heartfelt appreciation is felt for the support of friends, family, Doctor Manzar, Doctor Garg and the staff of Pinawa Hospital.
A memorial service is to be held at 1:00 p.m. on Saturday, November 7th at Sobering Funeral Chapel, 1035 Park Avenue E., Beausejour with a luncheon following at the Legion Hall also in Beausejour, MB.