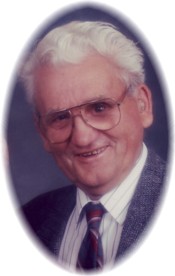 Frederick Walter Klapprat passed away peacefully in the presence of his family on Friday, October 15, 2010.

Dad was predeceased by his parents John and Emma, his sister Minnie and infant grandchildren Trevor and Leslie.

Dad was born in Eagle River, ON. At the age of nine he moved to Winnipeg with his family where he spent his youth. His frequent visits to Whitemouth resulted in him meeting the love of his life which led to marriage and a successful farming career. After many years of growing crops and raising livestock, he retired and took on the duties of managing the Riverbend Manor which he continued for 26 years.

Dad was a charter member of the Redeemer Lutheran Church. He served in various capacities with the church, the community club and agriculture organizations.

The family wishes to thank Dr. Spence and the remarkable staff of Home Care and Palliative Services at the Whitemouth District Health Center for their compassionate care.

In lieu of flowers, donations can be made to the Redeemer Lutheran Church Memorial Fund or the Whitemouth District Health Centre Personal Care Home.

A Memorial Service will be held on Monday, October 18 at 2:00 p.m. at Redeemer Lutheran Church, Whitemouth, MB.

Offer Condolence for the family of Frederick Walter Klapprat