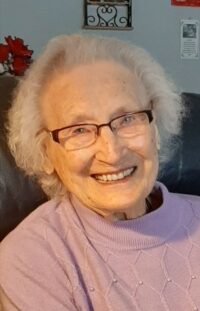 It is with heavy hearts we announce the passing of our beloved mother, who passed away peacefully in her sleep in the early hours of August 17, 2022.

She was the fifth of ten children born to Jacob and Ernestine Schmollinger.

She was baptized into the arms of Jesus Christ as an infant and dedicated her whole life to her Christian Faith and family.  Mom quit school with a grade VI education, so she could continue with her Christian schooling and help her parents with farm work and care for her younger siblings.

Mom moved to Winnipeg as a teenager to work in a boarding home where she worked for a few dollars a month plus her room and board.  It was there Mom learned to bake and cook.  Her baking and cooking skills were evident for the rest of her life as she took great pride in.

Mom returned to the Roblin area eventually dating our father Albert Liske, a young farm hand, living with his mom and dad on a farm in the R.M. of Hillsburg.

They would eventually marry on April 29, 1942 at St. John’s Lutheran Church in Shevlin, Manitoba.  Upon marriage they farmed in the Shevlin area until 1961 when they purchased a farm in the R.M. of Shellmouth in the Tummel area.

Mom lived with our father on the farm until 1974.  It was at this time our father passed away and she sold the farm and moved into Roblin.  She would be employed working at a local department store as a sales clerk.

Mom would eventually marry Jim Gaber and continued to live in Roblin until 1988 at which time she moved to Beausejour following Jim’s passing.

While living in Beausejour at the Royal Oaks apartments, Mom soon became everyone’s friend.  Church and her Christian Faith continued to be important to her.

Mom, during her years in Beausejour, soon became known as the pyrogy queen for the thousand of pyrogies she would sell or give away.  Who can forget mom’s delicious cinnamon buns, oozing with melted brown sugar and butter.

Mom’s favourite pastime was her love for watching the Blue Jays and curling.

Mom’s #1 love was watching her grandsons and great grandchildren play ball or hockey.  You could always find her sitting in a lawn chair at the ball diamonds cheering on her grandchildren.

During hockey season you found her sitting behind the glass at the Sungro Centre cheering for her grandsons or great grandchildren.  She never missed a Beausejour Stars Senior Hockey game, cheering on Rick, Dallas or Lonnie.  When our home team lost, it was always the goalies fault.

A Graveside service will be held at Shevlin St John’s Lutheran cemetery on September 5 at 1:00 p.m. with Pastor Barry Wood officiating.

Offer Condolence for the family of Frieda Gaber-Liske