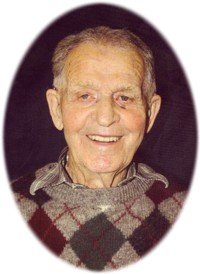 It is with great sorrow that the family announces the passing of George Gerald Schreyer on Wednesday, October 17, 2012 at the age of 92.

George loved to talk to people and had no trouble approaching strangers and striking up a conversation with them.  His favorite pastime was tinkering in the shop, creating different things.  He would do this for hours on end.  Later in his life, he enjoyed going to dances with his special friend Bernice.

The family wishes to thank the Staff of East Gate Lodge in Beausejour where Dad spent the remainder of his life.  Your thoughtfulness and caring towards Dad was very much appreciated and will always be remembered.

Cremation has taken place and a Memorial Service was held on Wednesday, October 24 at 1:00 p.m. at Sobering Funeral Chapel, 1035 Park Avenue E., Beausejour.

Offer Condolence for the family of George Schreyer