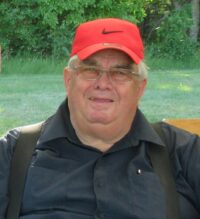 Gerald grew up on his parent’s farm in River Hills, MB.  He attended Winnipeg Falls South School in River Hills until Grade 9, then attended Whitemouth Collegiate, where he met his sweetheart, Elaine Trindall, they were married July 15, 1967.

He was predeceased by his parents Otto & Hildegarde Merke, sister Muriel (infant), brother Victor and recently his brother-in-law Frank Behnke.

In 1964, Gerald began working at AECL, Pinawa, with Dominion Catering first as an assistant manager and later as manager.  In between, he worked for the LGD of Pinawa and would run the projector for the LDB movie theater on weekends.  In 1969, Gerald started a new business venture as a Texaco Bulk Agent first in River Hills, then in Pinawa.  In 1976, Gerald began another business venture, fertilizer and chemicals with Cominco, an agricultural mining company.

Gerald and Elaine have done some travelling over the years.  Their Honeymoon was spent travelling through the states to B.C.  In 1972, they travelled with his maternal grandmother to Germany to visit her sister.  They also have been to Acapulco, Puerto Vallarta, Paris and Toulouse, France, the Netherlands and Leipzig.  Gerald has been to NASCAR races in San Diego and has seen the Hoover Dam.

In 2017, Gerald and Elaine were married 50 years, 49 of them in business together and raising a family.

Love of the land never took him far from farming, being his own boss was his passion.  He loved children, going to auction sales, visiting friends and shopping for deals, whether it was machinery or groceries, if the price was right, he always came home with a smile on his face.

He will be sadly missed by everyone in the whole family, the many friends he made over the years and especially by his tail wagging sidekick, Diesel.

Offer Condolence for the family of Gerald Kenneth Merke