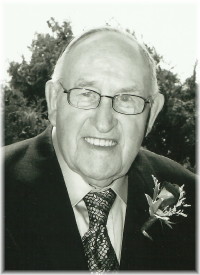 Following a courageous battle with cancer, Gérard (Gerry) Bourgeois passed away peacefully at the age of 91, on Sunday, July 7, 2013 at St. Boniface Hospital.

Gérard was born by the warmth of the kitchen woodstove on the family farm in St. Malo, MB on September 21, 1921.  The eldest son in a family of 12 children, he was no stranger to hard work.  In 1946 he married Angélina Champagne and together they raised a family of seven children while residing in Powerview and St. Georges.  Gérard was a millwright at the Pine Falls Abitibi Paper Mill for 34 years.  He was a handy man and frequently took on extra jobs in order to support his family which he was very proud of.  He exhibited a “joie de vivre” through good times and hard times.  He retired in 1982 and later moved to St. Boniface where he spent the latter part of his life.

The family would like to extend its gratitude to the St. Boniface Region Home Care Staff and to the staff at the Manoir de la Cathédrale Manor for their help and support over the last two and a half years.  A special thank you goes to Garry Frost, from the manor, for being so accommodating, kind and patient when chauffeuring us with Dad to his numerous medical appointments.  We also wish to thank the St. Boniface 6A hospital staff, in particular, nurses Stephen, Nicole and Beth for their sincere compassion and care during his final days.

In lieu of flowers, if friends and family so desire, donations may be made to St. Georges Parish- Cemetery, Box 31, St. Georges, MB R0E 1V0.

Offer Condolence for the family of Gérard Joseph Bourgeois