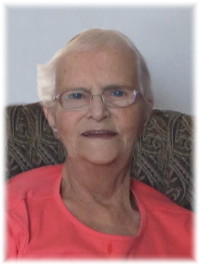 It is with great sadness that we announce the passing of Anne Van Aert peacefully with her family by her side, Wednesday, March 6, 2019 at the Beausejour Hospital at the age of 81.

Funeral mass will be held on Monday, March 11 at 11:00 a.m. at St. Mary Roman Catholic Church in Beausejour, MB with interment to follow in the parish cemetery.  Lunch to follow at the Legion Hall.  Viewing will take place on Sunday, March 10 from 5:00 p.m. to 7:00 p.m. at Sobering Funeral Chapel in Beausejour.

Mom was predeceased by her parents Peter and Anna and her brother Martin.

Mom was born in Udenhout, Netherlands on June 21, 1937.  She studied to be a nurse before immigrating to Canada with her family in 1960.  Mom met dad soon after she arrived in Canada and they were married in April of 1962.  In 1965 dad and mom bought a parcel of land outside the town of Beausejour and began their farming career.  Mom enjoyed her years raising her four children on the farm.  She was very involved in the hog operation and her years of nursing school helped her to be their personal animal care specialist.  Mom and dad raised their four children to all have a strong work ethic and always taught them to do their best.  They took pride in their farm and taught many of their nieces and nephews how fun farm life could be when they would come for a week-long summer visit.

Mom loved her family dearly.  Her children, grandchildren and great grandson were such an important part of her life.  She was very proud of each and every one of them and cherished the time she was able to spend with all of them.  Mom was also very close with her siblings and would never miss an opportunity to spend time with them.   Mom’s immense love for her family was shown through the food she prepared. Over the years she hosted many of the family Christmas and Thanksgiving dinners using the food that was grown on the farm.  Anytime we stopped in for a visit, she would drop what she was doing and without asking, if you wanted some or not, a bowl of soup and a cup of tea were put on the table in front of you. Once she was content that you ate enough, the conversation often turned to politics and the deficit. She liked to follow politics and would often comment on the current parties’ ideas and fret about “who is going to pay for that?”

Mom enjoyed music, reading and being out in nature.  She had a reputation for having an immaculate vegetable and flower garden. During our visits she was often working in the garden and it showed. Her yard was like a park!

Mom was a very private and quiet person with a kind personality, a big heart and a sense of humor.  She will be dearly missed by all those that loved her.

We would like to thank Dr. Schmidt, CancerCare and the Beausejour Hospital for their compassion during mom’s short battle with pancreatic cancer.

Donations may be made in Anne’s memory to CancerCare Manitoba, 675 McDermot Ave., Winnipeg, MB R3E 0V9.