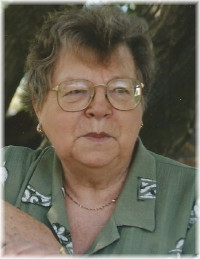 Trudy is the daughter of the late Alfred and Helen Baird, and wife of the late Dan Penner who passed away October 10, 1989.  She is survived by her brother Alfred and nieces Laura, Denise and Michelle and their families in Scotland.

Trudy was born December 23, 1927 in Arbroath, Scotland and came to Canada in 1952.  She lived in Montreal four years and came to Winnipeg in 1956.  She worked at Eaton’s for 17 years and moved to Thalberg in 1974.  Dan and Trudy farmed there, and she was a member of Trinity Lutheran in Thalberg.  She enjoyed singing in the choir.  She moved to Beausejour in 2000.

A Funeral Service will be held on Saturday, December 15 at 10:00 a.m. at Sobering Funeral Chapel, 1035 Park Avenue E., Beausejour.  Interment will be held in Arbroath, Scotland at a later date.

In lieu of flowers, a donation may be made to East Gate Lodge.