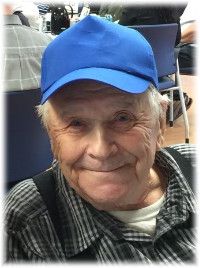 It is with great sadness we announce the passing of our brother, brother in-law , uncle and friend, Gus Fiebelkorn at East Gate Lodge Personal Care Home on November 11, 2020.

Gus was born in Friedensfeld Manitoba.  As a young boy the family moved to a new homestead in Glenfields Manitoba.  Growing up he helped on the farm and when he got older he worked in the bush for a few year like most young men at that time. Later on Gus bought his own farm near the family homestead.  He farmed for a number of years.  While farming he also worked at a Peat Moss plant east of Beausejour.  He retired and sold his farm  and moved to Beausejour.  When he lived in Beausejour Gus would go for walks, especially to Cryplywy Park.  when the chokecherries and saskatoons were ready he would pick pailfulls  and make juice, lots of juice.  He always said the juice was good for you. He loved going fishing with his friends and cousins.  He had the largest fishing box that weighed a ton with fishing lures for every type of fish and water condition.  Gus also loved going on road trips with his friends and his trusty movie camera was always at his side.  He had movies of trips to the States and parts of Manitoba and movies of family functions.  Gus loved music.  He taught himself to play guitar and would play for family and friends every chance he got. Gus was a friendly and happy-go-lucky guy and everyone was his friend.

A special, heart felt thank you to the nursing staff on the Shamrock Unit at East Gate Lodge Personal Care Home for their special care over the past four years.

Due to Covid 19 a private family funeral will be held.

Offer Condolence for the family of Gustav Fiebelkorn