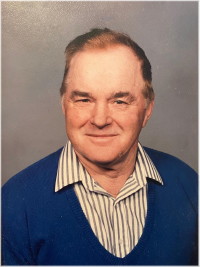 It is with great sadness that the family of Harold Rattai announces his passing on Saturday, May 29, 2021, at the age of 91. Harold will be lovingly remembered by his wife and soulmate of 65 years, Marlene (née Lange), and his son Melvin (Bernice) and his daughter Sheila (Garry) Dancho. He will be greatly missed by his grandchildren Jody (Chris) Thiessen, Cory (Lori) Rattai, Raquel (Scott) Dancho, Jasmine Dancho, and Hope (Oliver) Dancho, and two great-grandchildren Kathryn Thiessen and Theodore Rattai, and two step-great-granddaughters Madeline and Isabella Mcrobie. He also leaves behind his brother Garry (Barb) Rattai of Sioux Lookout, Ontario, sister-in-law Esther Rattai, and many beloved nieces, nephews, cousins, and friends.

Born as a third-generation Canadian farmer, Harold was raised on a farm south of Tyndall, Manitoba. The family later moved to Green Bay when he was 14. Harold farmed all his life and loved his John Deere machinery. He enjoyed tending to his own mixed farm for 58 years. He was devoted to his fields, checking them daily, and grew canola, soybeans, and wheat, and raised cows, chickens, and pigs. He received a badge of honor for 50 years of purchasing farm insurance with Manitoba Agricultural Services Corporation (MASC).

Harold loved to hunt deer and moose with his buddies, including his long-time friend Paul Zielke, and shot his last deer in the fall of 2020. His favorite hobbies were making homemade wild game garlic sausage and buckwheat sausage, and smoking fish, bacon, and ham. He was an avid gardener and took great pride in having a weedless garden. Harold and Marlene were always busy making preserves and juices from their garden harvest. Harold loved to watch heavyweight boxing and was a very sociable person with an excellent wit. He always looked for a reason to have friends and loved ones over to celebrate and share a laugh over a good meal.

Harold and Marlene enjoyed traveling together, highlights included a tour of eight European countries, and sunny destinations like Hawaii, Mexico, and Florida. They often traveled with dear friends and visited many relatives all over central Canada.

In 2014, at the age of 85, Harold moved off the farm to Beausejour. He continued to work the fields until he retired at 89. He would have continued farming until his last day, if not for his health. The most precious thing in his life was his family and he enjoyed many happy family gatherings over the years. In the end, the Good Lord called Harold to heaven on a warm spring evening at home, with his wife and daughter by his side.

The family would like to thank Dr. Partyka and all the care workers, along with Lorraine, Linda, and Michelle who helped take care of Harold while he received palliative care.

Following COVID restrictions, a funeral service will be held for the immediate family at 10:00 a.m. on Friday, June 4, 2021, at Sobering Funeral Chapel in Beausejour. Pastor Daren Gallivan will officiate. The public is welcome to attend outside in the Sobering Funeral Chapel parking lot where they can remain in their vehicles and tune the radio to 98.1 FM to listen to the service. The funeral service will also be live streamed for the public via zoom at:  https://zoom.us/j/91483861252

The attendants will collect condolence cards and a program will be provided. There will also be a guest book available to sign. Harold will be laid to rest following the service at Zion Lutheran Church Cemetery on First Street North in Beausejour. The pallbearers are Allan Rattai, Cory Rattai, Chris Thiessen, Scott Gurski, Daniel Lange, and Glenn Hastman.

Offer Condolence for the family of Harold Rattai