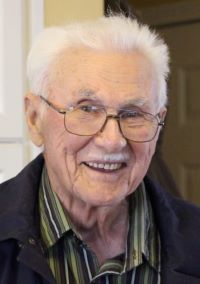 It is with great sadness that we announce the passing of Harry Arseniuk, on Wednesday April 13, 2022, at the age of 98 years.  He passed away peacefully in his sleep, with family at his side, at the Pinawa Hospital.

Dad lived his whole life in the LDB area. He was born in Berryland Manitoba, and attended school in LDB.  After completing grade 6, he left school to help his father work on the farm. In those days it was common for children to leave school almost as soon as they learned how to read and write and ‘do’ arithmetic.

Dad and Mom were married in 1947, settled on the home farm just south of Lac du Bonnet, and lived there for the next 12 years.   Then in 1959, along with 4 kids at that time, they moved to Hill 60.  Over the next while, they bought and moved several cottages to the property, and rented them to tourists and fishermen.

By 1975 he took an interest in wild rice farming, and started working for Jack Wade at the Indianhead Wild Rice plant.  Eventually he purchased the business outright.  Dad processed and sold wild rice until 2011.  By that time he was 88 years old – it was time to retire!

In his golden years, he enjoyed going for a drive to town, to pick up the mail and have coffee with his friends. Most LdB people recognized his burgundy half ton cruising the streets!

The family wishes to thank the Homecare staff for their daily visits, he looked forward to them everyday.  Thank you to Dr Bruneau and the caring Pinawa Hospital nursing staff.  Dad was so very lucky to be under the care of Dr Selena Papetti, she showed such care and compassion for him and our whole family. Thank you so much Dr. Papetti.

In accordance with his wishes, cremation has taken place.  A memorial service will be held Wednesday, April 27th at 11:00am at the Lac du Bonnet Community Centre, 25 McArthur, LdB.

To a good life, came a peaceful end.

He died as he lived, everyone’s friend.

Offer Condolence for the family of Harry Arseniuk