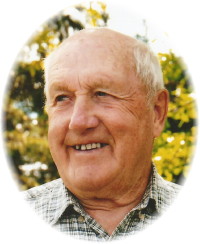 It is with great sadness that on Thursday, November 27, 2014, at the age of 84, Harry Martin Jorgenson, after a short but valiant battle with cancer, has passed away.  He has joined his beloved wife Lois who predeceased him in 2010.  Harry leaves behind his children Cathy (Bill), Vern (Annette), John (Leanne), Cheryl (Darryl), Jeff (Debbie), Dennis (Karen) and Denise (Larry), 22 grandchildren, 10 great grandchildren, his 2 sisters Verna Storseth and Irene Noel, 2 sisters- in-law Grace (Glynn) Morden and Marlene(Vince) McNeil, Hilda Jorgenson, Deannie Jorgenson as well as numerous nieces, nephews and friends.

Harry was born April 10, 1930 in Whitemouth, MB. He left home to work in the construction field at the age of 18 and while working in Ontario he met the love of his, Lois.  They married 4 years later, moving many times, finally settling down in Winnipeg where Harry was employed with Griffin Steel Foundries until his retirement in 1995.  It was in 1999 that Harry returned to his roots and moved to Whitemouth to live out the rest of his life.

That final move is what brought him closer to his greatest passions, the outdoors, mother-nature, hunting, fishing, his bush camp and we cannot forget his berry picking.  He loved his gardening, canning and jam making.  He had the firmest handshake, the biggest hug, the widest smile and an open door to anyone that dropped by.  He was a generous man, full of wit and humor.  Harry was known as the “host with the most.”  Harry’s greatest attribute was his ability to be the ultimate caregiver, caring for his wife throughout his retirement after she had suffered a stroke.  He will be greatly missed by all that knew him.

In lieu of flowers donations may be made to:

Offer Condolence for the family of Harry Martin Jorgenson