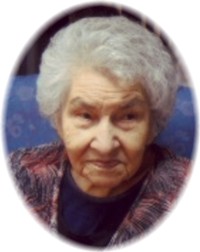 Mary Ducharme, aged 88 years, passed away peacefully at the Beausejour Hospital with her family by her side. She was born April 2, 1924 in Cross Lake, MB.

She was predeceased by her husband Gabriel, her son Roy and in infancy Beatrice, Lena and Bimbo.

Many thanks to the staff at East Gate Lodge for their care and compassion.

In lieu of flowers, donations may be made to Siloam Mission, 300 Princess Street, Winnipeg, MB R3B 1M3.