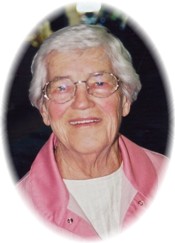 Peacefully on March 18, 2011 at the Whitemouth Personal Care Home, Hilda Gander, passed away in her sleep.

Born January 27, 1922 in Russia, Hilda married her beloved husband Jim in 1942 in Kenora and moved to Oakbank in 1950 with her 3 children; Eddie, Warren and Raymond. Daughter to Emil and Helena Tiede, sister to Elsie, Erna, Hattie, Alice and Eddie and grandmother to Jason, Maureen, Trent, Michael, Jeff, and Ryan,

Hilda was well known to the residents in Oakbank and surrounding area due to her long-standing involvement in the community. Hilda operated a restaurant and store when first moving to Oakbank. She was a tremendous seamstress and people throughout Springfield came to her for their sewing needs. She utilized her beautiful voice by singing with the Sweet Adeline’s. Her volunteer nature further extended to being an active member of Oakbank’s Over 50 Club and also writing for several local newspapers, including the Beausejour Beaver and The Drive magazine.

Funeral Service will commence at the Oakbank Baptist Church on Thursday, March 24, 2010 at 10:00am. A reception at the church will follow the burial at Sunnyside Cemetery.

If friends or family so wish, donations can be made to The Winnipeg Humane Society in lieu of flowers.

Offer Condolence for the family of Hilda Gander