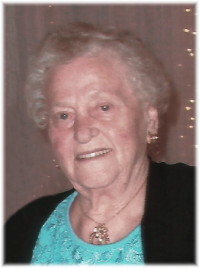 With deep regret, we announce the passing of our mother, grandmother and great grandmother, aunt , & sister-in-law Ida (Marufka) Schiefelbein on Sept 25/2016.

Her life began and ended with challenges but we believe it was her strong “determination” that got her though. She was born the youngest of a large family, just in time for the dirty thirties and then, together with her family she faced the challenges that the Polish government inflicted on the German people. She tells stories of hiding her father amongst the cows to protect him because he was too old to go to war and they feared what would happen to him. How the government just came and took everything they owned or about having only one glass of water and a piece of bread the size of her palm to eat after working all day. There was no house to go back to so eventually she decided to immigrate with her sister Emilie Schattschneider to Canada to join their only surviving brother Edmund in 1952. Once in Canada, She really enjoyed cooking and cleaning at the Princess Elizabeth and King Edward hospitals until one day she went to a dance and met a handsome man by the name of Carl Schiefelbein. They were married Sept 12/1954 and there was rarely a time when they were apart. One of their favorite past times was going to auction sales and this was evident by the number of “treasures” they acquired. By this time Allan had joined their lives and they divided their time between their dairy farm in Whitemouth and their house in Beausejour. In 1985, their family grew to include her “favorite” daughter-in-law Helen (“I have no choice, I only have one” she used to say with her smirk). The family just seemed to increase after that with the addition of Tara-Dawn (1987), Heidi (1989), Sean (1991) and Nathan (1994).  When the love of her life was diagnosed with COPD she diligently researched all types of herbs or methods in hopes of curing him. Toward the end she never left his side, not even when he was admitted to the hospital. After he passed away in 2001, she rallied on and after celebrating thanksgiving with us went home with a kitten, whom she named “Puddy” and a stray cat called “Mousy” joined them somewhere along the line. Her love for cooking and sewing was evident by the number of cookbooks and boxes of material that were in her possession.  She was very happy when Tara married Lindsay Miyashiro on Sept 14 /2013 and was overjoyed their daughter Evaa Marie was born on Sept 8/2015. She looked forward to seeing her every chance she got. She was not always willing to share when it came to holding her great granddaughter.

The last few years she struggled with her mobility but always insisted she didn’t need help with anything, no matter what you offered.  We would like to thank everyone who helped care her (Teri, Val, Charlotte and all the home care staff), Aunt Anne (for the daily phone calls) and all who went above and beyond even when it wasn’t always easy and to Dr. Daphne Schmidt and the nurses and therapist at the hospital(s) who made her stay as comfortable as possible.

Offer Condolence for the family of Ida Schiefelbein