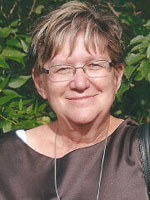 Ilonka Mazur (nee Schmitz) passed away peacefully at the St. Boniface Hospital with her family at her side. She was the beloved wife of Ron, and much loved mother of  Jonathan , Daniel and Michael (Brittany).

She also leaves to mourn her passing her father Gerard Schmitz and brothers Gerry (Calgary); Ron (Carol) as well as many brother and sister in-laws nieces and nephews.

Ilonka was predeceased by her beloved mother Agatha Schmitz.

Ilonka was born in Amersfoort, The Netherlands and came to Canada with her family, settling in the North End, later moving to Clifton Bay.  She married her husband Ron in April 1974, and purchased a home in North Kildonan where they raised three sons, Jonathan, Daniel and Michael of whom she was very proud.

Ilonka attended grade school at St. Edward’s School and high school at St. Mary’s Academy. She completed a course in Medical Laboratory Technology as a Cytotechnologist in June 1972 and worked in cancer detection at the Health Sciences Center until she and Ron began a family. She stayed at home to take care of the boys, working part time as a health care aid and doing volunteer work. As the boys started school, Ilonka wanted a new challenge so she enrolled in the nursing program at the Grace Hospital. She graduated, with honours, as a registered nurse in September 1995. After initially working part time in various wards at the Grace, she found her calling in Psychiatry where she worked until she retired in June 2014. While working in Psychiatry, Ilonka also did some private nursing.

Ilonka loved her family and enjoyed cooking and baking for Ron and the boys. In order to be able to attend all the boys’ soccer and hockey games, she chose to work the night shift.  Ilonka also loved entertaining family and friends. Inviting a few friends over usually ended up in a packed house with plenty of food and drinks for all.

Ilonka enjoyed many outdoor activities. She loved camping, downhill skiing, wilderness canoeing and hiking, usually with dear friends Bob and Marg, Bob and Marilyn and Laurie. She also loved traveling. Her favourite destination was the Mayan area of Mexico. She loved flowers, planting numerous beds in the backyard, and took the opportunity to photograph dozens of flowers wherever she travelled. She also took a shine to Polar bears and there are few shelves in the house where a polar bear is absent.  She also managed to find every conceivable polar bear ornament to decorate the Christmas tree.  Ilonka liked to crochet to relax. In the last year, as failing health made more physical activities difficult, she made at least 26 large afghans which she gave to dear friends and family.

Ron and the boys wish to thank Debbie, Brittany, her dear friends Laurie and Marilyn and Sherry who helped to ensure that Ilonka was never alone during the time she was in the hospital. We would also like to thank our family and the many other friends and neighbours who visited and cheered up Ilonka during the last couple of years when she was ill.

The family also sends sincere thanks to the kind and caring staff of the St. Boniface General Hospital Palliative Care ward and Cancer Care Manitoba. In lieu of flowers, donations can be made to the Canadian Breast Cancer Foundation, Cancer Care Manitoba or other charities of your choice.

A service to remember and honour Ilonka will take place at 2:00 P.M. on December 19 at Sobering Funeral Chapel & Crematorium, 1035 Park Avenue E., Beausejour.

Ilonka will be lovingly remembered and missed by her family and friends.

we loved you very much and we have only our memories to remember our lives with you;

but the sweetness will linger forever as we treasure the image of you.

Offer Condolence for the family of Ilonka Maria Mazur