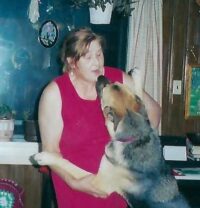 After a brief battle with cancer and a much longer one with the “golden years,” our loving Mom and Oma at the age of 90 went to have a cup of tea with her son.

She is predeceased by her son, Hans Bauer, her partner Gus Zimmerman, her husband Hanns Bauer, and her brothers in Germany, Hans, Deitmar and Horst. And the love of her life, her doggie Woody.

She is survived by her daughter, Ingrid Andrews, her daughter-in-law, Souada Bauer, as well as nine grand- children and six great grand-children.

Mom came from Germany to Canada in January of 1953, alone and with one suitcase, some money and not able to speak one word of English. That was very brave, and always defined her being.  She went on a train from Halifax to Winnipeg, and I remember her telling me that she asked someone who spoke German, “What are all those white things?” She was told that they are frozen lakes and she thought, “My God, what a beautiful country.”  Thanks to Church groups, she had a job and an apartment when she arrived in Winnipeg.  Mom was a seamstress by trade, and worked for Freed and Freed for many years  and they were like family to her – beyond kind and generous.

In 1959/1960, her husband, Dad, built a cabin in Pointe du Bois, and then put on an addition in 1972. That’s where Mom lived for the rest of her life.  In that period, she collected artifacts that she donated to the University of Winnipeg and became an honorary member of Manitoba’s Archaeologists.  In that period, she also collected clay from the Winnipeg River and made beautiful pottery.  Mom was always curious about every facet in life.

The family wants to thank all the lovely people in the Beausejour Hospital, with special thanks to Dr. Hanna and Laura, and particularly Karim.  Karim has been a life-line to sanity.  Love you guys.

Cremation has taken place. There will be a private family gathering at a later time this summer when the snow has finally gone and then when the mosquitoes return.

Offer Condolence for the family of Inge Luise Agnes Bauer