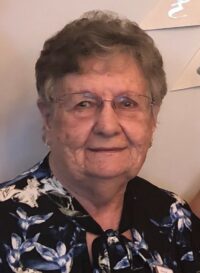 It is with sadness we announce the passing of our Mom, Chocha, Aunt, Baba and GB.  Peacefully on April 15, 2022, Irene lost her second battle with cancer.

Mom grew up in McMunn along the Birch River.  She had a short career working in Winnipeg, which she loved until children became a priority and her husband chose to leave the city to resettle back in McMunn.  Irene then took on a new career in various restaurants in the area as a prep cook, and one of the best soup makers.  Christmas would not be the same without late night turkey sandwiches and homemade turkey soup.  Mom enjoyed her large garden which became delicious preserves and freezer fare.  Mom always valued family and was happiest spending time with her sister Jean.  She was a caregiver at heart who also took on the responsibility of caring for her parents as they aged.

Over the years, Irene and Ed travelled extensively with friends and family to BC, Texas and a walk into Mexico, the East coast via bus, Toronto to visit family, Virginia to visit a niece, Las Vegas girls trip, France, Poland, and Ukraine to retrace family roots.  Also, numerous Casino bus junkets with a large group of friends.

Thanks to all the family and friends who visited her a Grace Hospice where she spent the last 6 months.  She had very few days where she did not have the comfort of company, which speaks of her warm giving character.

Memorial service will be held in Irene’s honour at Sobering Funeral Chapel in Beausejour on Wednesday, April 27 at 11:30 a.m.  Family requests that masks be worm.  Interment to follow at St. Mary’s Cemetery in Prawda.

Offer Condolence for the family of Irene Dobush