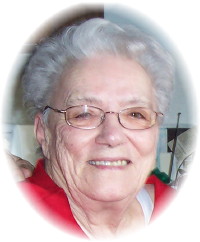 Peacefully, one day after her 90th birthday Irene passed away at the Beausejour Hospital.

Irene was a widow at a young age and  faced  the challenges of raising two young children on her own and obtained work at the Beausejour Post Office until her retirement.   She enjoyed this job immensely dealing with the public.  She was a “people person” always smiling and joking.

A few years later, she met Steve Kizlik.  She always professed that until her children flew the nest she would not remarry.  So when the nest became empty, Steve and Irene were married June 3, 1977, celebrating their 35th wedding anniversary last year.

Irene’s grandchildren, Ashley and Bradley, were the shining stars in her life.  Grandma never missed a piano recital, Christmas or orchestra concert.  Her grandchildren were blessed with the Hadaller musical attributes and the love of music.  No matter what Irene was confronted with she found the positive side to everything.

The family would like to extend their gratitude to East Gate Personal Care Home in Beausejour where she resided the last year and a half.  Their compassion and care was beyond what was expected.  To all the staff, thank you for the love and support you gave a wife and mother.  Thank you to Verna Wojcik for taking care of “Auntie Irene” the past few days.  In lieu of flowers, if friends and family desire, donations in her memory can be made to East Gate Personal Care Home, Beausejour, Manitoba.

Mom you were getting tired and kept on telling us you wanted to go home and now you have been granted your wish.  You were an amazing person and your family has been blessed with your presence in our life and for what you have taught us.  We love and will miss you but you deserve to be in heaven with the rest of the angels.

Offer Condolence for the family of Irene Monetta-Kizlik (nee: Hadaller)