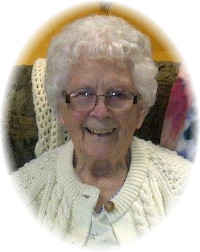 Unexpected but peacefully, with family by her side, Irene left this world to join her beloved husband John, who had predeceased her in February 2005, whom she spoke of often and missed greatly.

Born in Winnipeg to John and Mary Garry, she grew up with sister, Mae, and brother Dave, in the Weston area. Irene and John married in 1946. They resided in Winnipeg until 1966, when they set up roots in Pine Falls, MB where they raised two cherished daughters and opened the First Marshall Wells hardware store.

Irene leaves behind, daughters Rosemary (Don) Gaffray, Debbie (Howie) Hamaburg, and grandsons Darrin & Jeffrey, along with many nieces and nephews. Also, left to mourn is special great-niece Wendy Johnson. Mom dearly loved and adored Wendy as they had shared many great times together.

She had lots of long-time friends, and many new ones during her last five years while residing at the Ironwood in Pinawa, MB. The family wishes to send a special thank you to all the Ironwood staff, home care workers, residents and everyone who have been part of mom’s long, healthy life.

Thank you also to the Doctors and nurses at the Pinawa Hospital for their compassion shown Irene and family during this short but difficult time.

Cremation has taken place. A memorial service will be held at the Pinawa Lutheran Church at 25 Massey Ave, on Saturday August 29th, 2015 at 1:00p.m. Interment to follow at the Notre Dame du Laus Cemetery at 4:00p.m, at Hwy 304 & Broadlands Rd.

In lieu of flowers, donations may be made to the Winnipeg Ostomy Association, 204 – 825 Sherbrook St. Winnipeg, MB R3A 1M5.

Offer Condolence for the family of Irene Ruse (nee Garry)