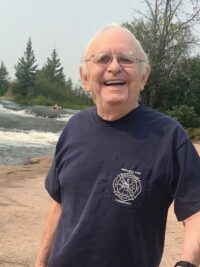 It is with a heavy heart we announce the passing of our beloved father, grandfather, great grandfather, uncle, and friend, James “Lloyd” Howe, who passed peacefully on September 15, 2022, at the Lac du Bonnet PCH at the age of 86.

He was born on March 24, 1936, to James Walter and Viola Gertrude (Colgan) Howe of Kirkton, Ontario. Lloyd lived in Kirkton Ontario until he was four years old. He then moved with his family, two brothers and one sister to London Ontario. At 24, he married Marian Rader and had two girls, Shelley and Mary-Jo. Lloyd and his young family moved to Lac Du Bonnet in 1973, when he purchased Walter’s Shell and Cozy Corner Restaurant, located where the Co-op is currently located. In 1977, he married Marilynn (Marek) and together had two daughters Connie and Debralee.

Despite being busy with the gas station, restaurant and his family, he spent much of his time focused on the day-to-day operation of the fire department. He joined the Lac Du Bonnet and District Fire Department in 1974, when it was no more than a small team or club of untrained volunteers, with very old equipment and an unsuccessful track record in saving any infrastructure. Lloyd loved the community, the fire department and the camaraderie of the team. He sold the Shell station in 1983 and moved his small engine business into his garage at home (Lloyd’s Small Engine and Outboard Services). In 1986, Lloyd became the new Fire Chief and under his supervision, the department had become a more serious operation. With the help of a Joint Emergency Preparedness grant and a lot of fundraising ($27,000), the department bought new equipment (fire truck and jaws of life). Over the coming years, more equipment was purchased and the firemen were properly trained. In 1985, Lloyd took a casual position as a bus driver for the Agassiz (Sunshine) School Division and 1987, he started driving full-time. June 30, 2000, Lloyd was presented with the Fire Services Exemplary Service Medal and bar for 25+ years of service to the community. He always said, “it takes a special dedication to be a firefighter” and he exemplified that dedication to the community of Lac Du Bonnet.

Lloyd loved to travel, spend time with his family, fish and sit by the bonfire and watch his grandchildren. He is survived by his children, Mary-Jo, Shelley (David), Connie (Darryl) and Debralee (Mike), grandchildren, Megan (Corey), Melissa (Dax), Ashley (Darren), Malachi (Rebecca), Dean (Christine), and great-grandchildren, Sophia, Pryce, Colby, Livyne, Nolan, Scarlett and Cody; and many nieces and nephews and friends.

He was preceded in death by his wives Marian (1976), Marilynn (2006), parents Walter and Viola, brothers Stan and Mac, and sister Betty.

As per Lloyd’s wishes, there will be no funeral service held and a private celebration of life will be held at a later date. Many thanks to the Lac du Bonnet PCH staff for all the care and compassion they showed our father. In lieu of flowers, if friends and family so desire, donations in his memory may be made to Dementia/Alzheimer’s society or to the Lac du Bonnet Personal Care Home.

Offer Condolence for the family of James “Lloyd” Howe