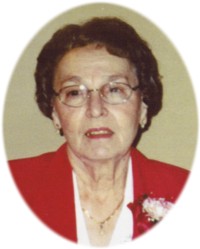 Peacefully, in her sleep on January 24, 2012, Jean Bukoski passed away at the East Gate Lodge in Beausejour at the age of 85.

Jean was born in Tyndall, MB on October 4, 1926.  She spent her childhood days growing up on the family farm and attending Tyndall School.  She left home for the big city and an independent life with an apartment and job at the Children’s Hospital as a slating clerk.  Jean married Edward Bukoski – the love of her life in 1976.  After marrying Edward they lived in Tyndall, MB for many years.  She was an avid gardener and took great pride in her garden and flowers.  She also enjoyed travelling with Edward, cooking, baking and loved a good card game or just a meal with family and friends.  Jean and Edward moved to Beausejour, MB in 2002 where they enjoyed going for coffee and the companionship of people.  But more than anything in life, Jean’s heart belonged to her husband Edward.  She will be missed by all those whose lives she touched.

Her family would like to express genuine gratitude to the compassionate caregivers at the East Gate Lodge that brightened Jean’s day.

In lieu of flowers, if friends and family so desire, donations in her memory may be made to the Alzheimer Society of Manitoba, 10-120 Donald Street, Winnipeg, MB R3C 4G2.

Offer Condolence for the family of Jean Bukoski (nee Kazina)