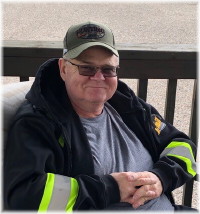 It is with broken hearts that we announce the unexpected passing of Jeff, with his beloved partner Angie by his side at the age of 54 years on April 1, 2021.

Jeff was predeceased by his father John in 1977, mother Pearl in 2008, many special fur buddies, and his extra special bud Ranger.

As soon as Jeff was able to walk he was into taking things apart and putting them back together (well, most of the time).  This carried through his enter life except things just got bigger and more motorized.  His passion for Chevy’s, snowmobiles, quads and even his prized Kubota kept him busy in his spare time.  Jeff became a journey man plumber early on and started his own business, Stelko Plumbing and Backhoe Service . After several years of working for himself he decided an 8-5 job might give him more time to enjoy his “toys”.   He began working as a plumber for the Province, first at Milner Ridge Correctional Centre and more recently at the Selkirk Mental Health Centre.

Jeff met the love of his life Angie and they moved onto a homestead in the Cooks Creek area. Together they enjoyed many trips to Fargo for races or just for a getaway.  Snowmobiling was a passion that took them to many places on the lakes. Most special was snowmobiling to South Beach every Valentine’s Day and spending a couple days. A snowmobile trip to Long John Cabin was also an annual must.  Jeff took pride in his yard and shop. His equipment was always in tip-top shape ready for the next “project”. He also was very knowledgeable in home renovations and could fix anything.  If he wasn’t sure about something he would eventually figure it out.  He enjoyed spending time in his shop working on something. Jeff also loved to joke around.  Throughout his 18 month illness he always pushed forward with determination. He looked forward to his future adventures with his love Angie.  He will be missed forever.

Over the years Jeff had many friendships which he valued very much. He loved telling many stories of memories from the past. Thank you to everyone for being there for him. He was the youngest of the family; our “kid brother”. We loved him and will miss him very much.  Jeff, we hope you can now enjoy watching Hockey night in Canada with Dad, keeping Mom on her toes, and enjoy having Ranger following you around.

The family would like to thank Dr. Partyka, the staff at Beausejour Hospital, Home Care, and Emergency Room Personnel for their care and compassion.

As per Jeff’s wishes cremation has taken place and a Celebration of Life will be held at a later date.

Offer Condolence for the family of Jeff Stelko