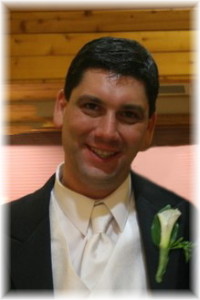 With great sorrow, the family of Jody Brown announces his sudden passing.  He left us at the age of 43. He will be lovingly remembered by his mother Sharon (Jan), his brother Justin and his many aunts, uncles, cousins and friends. His spirit will live on through his beautiful daughters, Devyn and Addison and their mother, Trista.  He was predeceased by his father Ross, his grandma and grandpa Brown and Stovin.

Jody was born in Oxbow, SK and raised in Pine Falls. He spent his childhood surrounded by family and friends.  He enjoyed the boat and just loved being on the open water.  After high school, Jody worked at the Pine Falls Papermill. He was passionate about hockey, football and fishing.  He played for many years with the Pineview Saints.  His love for hockey led him to the Junior Bs playing with the Beausejour Comets.  He also enjoyed football Sundays with his pals.  Another passion of Jody’s was music.  He spent countless hours listening to the tunes of Dave Matthews, Burton Cummings and many more.

But his greatest passion of all was his children.  Jody was very proud of his girls and spent their early years taking them for walks, bringing them for “slushies” and visiting his friends.  On family trips, he would spend hours with them at the pool.  He loved watching movies and loading up on snacks.   His daughters were his most valued treasure.

A celebration of his life will be held at the Notre Dame du Laus Catholic Church in Powerview, MB on Thursday, March 9, 2017 at 1:00 pm.  Lunch will be served following the service.  Interment will be arranged at a later date.

In lieu of flowers, donations can be made to the Addictions Foundation of Manitoba, PO Box 1118, Beausejour, MB  R0E 0C0.

Until we meet again, “Downtown”

Offer Condolence for the family of Jody William Brown