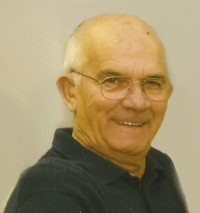 Joe passed away after a battle with cancer at the Selkirk General Hospital.  He leaves behind his loving wife Coreen of 62 years; his daughters Fay, Carol (Bruce Foster), and son Darcy (Barb); grandsons: David, Dustin and Danny; the joys of his life – twin great grandsons Jayden and Kyle; along with four brothers, five sisters, and their spouses.

He married Coreen in 1955, and started a family.  He worked in Souris, driving a cream truck, before moving to Lac du Bonnet.  There, he and his brother-in-law Earl bought a truck, and hauled ore from the mine.  He also hauled gravel, wood, and anything that had to be moved for Kleysen’s, M. Bruchanski, and Grewinski Trucking.

Joe’s passions were hunting and fishing, which is how he spent most of his summers.  Once the grandchildren came along, he would take them along.  Camping was another thing he loved to do with his sons and Coreen.  Later in life, Joe joined the Pioneer Club, and spent a lot of time playing floor curling and going to dances.

Offer Condolence for the family of Joe Dooley