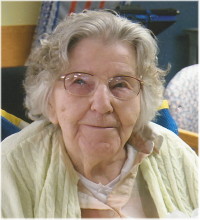 Peacefully, surrounded by love, on January 23, 2017, Nora passed away at the age of 100 at East Gate Lodge in Beausejour.

Nora was born and grew up in Green Bay, MB. She attended school in Green Bay and was baptized and confirmed in St. Paul’s Lutheran Church, where she later sang in the choir.  She met her husband Herman Arthur and married him August 3, 1940.  They farmed and raised their family in Green Bay until his passing in 1973.  At this time, their sons Ken and Garry took over the family farm and she lived with them for several years before moving to Beausejour, where she lived her remaining years.  Mom travelled to Europe with Lawrence, Lise, Art and Lise’s mom Fern. She also visited her sister Martha in Cleveland, Ohio numerous times. Her travels were a highlight in her life and she talked about them regularly. She especially loved it when she babysat her grandchildren, when they dropped in after school, or just stopped to visit.  We have many fond memories of spontaneous family gatherings. Christmas, Easter, Thanksgiving and special events were celebrated at Mom’s.  Her home was always open to family and friends.

She was predeceased by her parents Henry and Amelia, husband Herman, sisters Martha and Alma, brothers Harold, Alfred and Freddie.

We would like to thank the staff of East Gate Lodge and especially the Shamrock Unit for their wonderful care and compassion.

Funeral service will be held at 1:00 p.m. on Saturday, January 28 at Zion Lutheran Church, 403 1st Street North, Beausejour, with viewing one hour prior to the service. Interment will follow in the Green Bay Cemetery.