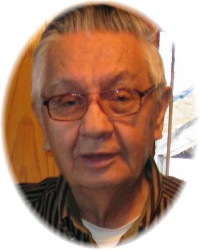 On Friday morning our Dad received his peace and freedom from the pain and sadness that had plagued him in the last few years of his earthly life.

He worked at different jobs throughout his life but mostly as a pulp-cutter for Abitibi (later Tembec).  He retired from there with 35 years of service.  Together with Virg they contributed to the community in various ways – visiting the elderly, singing at many wakes, and helping people when they could.

Dad was a resident at the George M. Guimond Care Centre at the time of his death.  We would like to thank the staff at the care home and the home care staff of the Health Centre for taking care of him.

Wake service will be at his home at House #64 North Shore Road.  Funeral Mass will be held on Monday, February 23rd at 1:00 p.m. at Fort Alexander Roman Catholic Church.  Interment to follow.