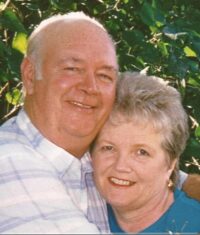 John Edwin Bellin, 84 years of Lac du Bonnet, MB was reunited with Annie, the love of his life on Saturday, January 15, 2022. Please ‘put a listen’ as Dad would say to his favourite song by Hank Snow – It’s You Only You That I Love – and rejoice. For Dad‘s heart is whole again. After 39 years of marriage then losing his wife Annie in 2001, Mom and Dad are now together.

This gentle giant was a devoted father to his children Duane (Barb) Bellin and Tracey (Lawrence) Ramsay and a beloved Papa to his grandchildren Shawn & Kaylee (Trevor) Bellin and Tyson & Teya Ramsay. His darling Teya beat him to the pearly gates in 2013 and took a piece of his heart with her. John was the corner stone of the Bellin family and will be missed by his sisters Mildred (Leo) Wauhkonen, Judy (Al) Beauchemin, Norma (Donnie) Hladki and sister in law Betty Attewell.  Preceding him to the promised land were John’s baby brother Bertie Bellin who passed when dad was nine and his brother and sister in laws Arthur (Eileen) Arneson, Elsie (Bill) Symbolic and Fred Attewell. John was especially thankful to Uncle Bill for all the camaraderie and Wednesday trips to Winnipeg for Whopper lunches these last 20 years. There are also many nieces, nephews and extended family and friends that will dearly miss their Uncle Johnny.

Dad was a real go-getter and worked hard his whole life. He quit school at 14 to work the family farm in Riverland then got a job with The Section Gang building the railroad to Pointe du Bois. Swinging a hammer all day driving steel spikes into railroad ties was hard work. In his heyday of physical shape dad could chin himself 25 times with one arm and split his shirt sleeves flexing his biceps.  Anyone who has shook John’s hand knows of his bone crushing vice grip. In his trucking years Dad was up before the first crow pooped every morning working 18 hour days to provide for us. A favourite memory, besides going to the pit with him on weekends, was his daily ritual. Without fail Dad would flick his tandem truck lights three times in the dark every morning when he left the yard “I–love–you”. And Mom would stand at the front door and respond in kind with three hard flicks of the porch light switch often waking us kids. Mom would keep Dad’s supper warm for hours waiting for his return. Dad gained 65 pounds his first year of marriage because Mom was such a good cook. Also the fact that he was a total cookie monster didn’t help. Johnny had a penchant for sweets that was legendary. He liked dessert at every meal. He would say – would you care for a “pill” or have you got any “dog biscuits” for the old man? His two nicknames for cookies. He and Uncle Helmer would go out fishing all day for Pickerel or Goldeye – rods, bait, scoop net and 12 chocolate bars! Dad was also a mechanical genius. He built his own tractor from scratch and whatever he needed he just made it. There was nothing he couldn’t fix. Recognizing his talents, neighbour and friend Stew McLean encouraged Dad to challenge the mechanics exam – which he passed with flying colors. That led to a long career at Tanco Mines as a mechanic. Dad transported the guys to and from Tanco daily in his big van and they always joked that they could set their clocks by John because he was never late. Ever.

John was a protector – of his mom, sisters, wife, children and family – even the neighbours. He ploughed their driveways in winter. Auntie Bea said he kept us all safe – from the rowdy bears and pesky beavers. And no one sled across the lake in winter until Dad checked the ice thickness by hand drilling holes and placing little evergreen trees to mark a safe path. He flooded the ice so we could skate in the winter and we each had our own Skidoos to trail ride as a family. Dad also enjoyed playing guitar, cards, crib and travelling south with mom.

What I will miss most is Dad’s humor. He would get a twinkle in his eye and fire off so many catchphrases and one-liners it would leave you in stitches. How are you doing dad? “Well – I’m still on this side of the grass” “Oh, six of one, half dozen of the other” and one of his favourites “Call me anything but late for dinner!” The best is when he would phone and greet me with “How’s the woman of my dreams doing?” Or “You’re looking mighty fine today!” He was kind, generous, dependable and liked to be “fussed over” and “looked after”. My heart goes out to the kind and compassionate care of the PCH nurses and support staff for all the hugs and love they showered on Dad these last two years. He appreciated you so much.

Cremation has taken place and there will be an interment this summer. As per Dad‘s wishes there will be no formal service. John would be honoured if you dunked a cookie on his behalf or extended an act of kindness to one another.

John was a good man. And he was loved.

Offer Condolence for the family of John Edwin Bellin