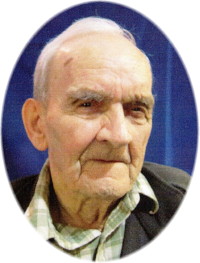 John passed away peacefully at the Beausejour Hospital, surrounded by his family on August 22, 2014 at the age of 98.  He was born on the family farm in Dencross, Manitoba.

He was predeceased by his parents Bill and Dora; his four brothers: Steve, Mike, Pete and Harry; sister Mary Walton; brother-in-law John Walton; as well as niece Darlene Walton.

He is survived by his sister Anne Krawchuk of Winnipeg, as well as numerous nieces and nephews.

John spent most of his life farming.  He enjoyed growing flowers, especially roses.

Flowers are gratefully accepted, or a donation may be made to a charity of one’s choice.

A Funeral Service will be held at 1:00 p.m., Thursday, August 28, 2014 at Sobering Funeral Chapel, with viewing one hour prior.  Interment to follow in Mars Hill Cemetery.

Offer Condolence for the family of John Krawchuk