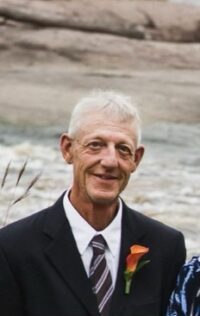 It is with great sadness we say goodbye to John – husband, father, grandfather, uncle and a friend to many, who passed away at the age of 69. He leaves behind his wife of 41 years Sharon, sons Bryan and Jamie, daughter-in-law Candice, granddaughters Taylor and Hayden, his sister Cathie Colpitts, and numerous nephews and nieces. John was predeceased by his parents Allan and Lillian, and his sister Judy.

John was born in Whitemouth, MB and attended school in Rennie, MB and later high school in Whitemouth, MB. He attended Red River College and then went to Maritime Forestry school in Fredericton, NB.  After graduation, he worked in the Northwest Territories before returning to Manitoba. His career as a Natural Resource Officer and being a member of the Provincial Fire Team led him to multiple posts in northern Manitoba and the Interlake before transferring to Hadashville, MB where he retired after 39 years of service in 2013. Over his career, John worked with many people and made numerous friends over the years.

John loved the outdoors, particularly trapping, hunting, and fishing. John began trapping with his dad and then took the line over himself, teaching his sons over the years. Jamie would frequently be out on the line with John checking traps, building a trapper’s camp, and getting some ice fishing in. John’s love of the outdoors was passed down to another generation with Taylor and Hayden enjoying fishing trips with Papa John.

Not one to sit still, John started a firewood and lawn care business after his retirement with Sharon, meeting several new people and making new friends. Sharon was eventually able to convince him to take some time off and try a cruise. Given his love of fishing, she thought it would be easy to convince him to get on a boat but after some arm twisting, he agreed to go. After enjoying the trip, he gladly got on the next ship, having gone to the Caribbean twice and to Alaska.

In honouring John’s wishes, there will be no service.

Offer Condolence for the family of John Rodgers