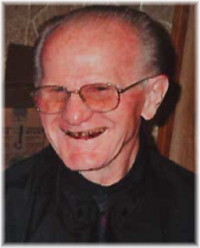 It is with profound sadness that the family wishes to announce John’s passing on October 22nd, 2015, at the Pinawa hospital.

Dad was predeceased by his parents, Karl and Teresa, his siblings, and Angela, his first wife.

John was born in Marburg, Austria, December 10th, 1919, the third of five children. He wanted to become an engineer, however further plans were interrupted with the onset of WWII. John was drafted into the Yugoslav army, was captured, and spent over one year in a German POW camp. After war’s end, John came face to face with the new communist regime, one that went against his many beliefs. Despite facing many obstacles he pursued his dream, and graduated as an electrical engineer in 1962.

His family would like to express their heart-felt thanks to Dr. Garg and the staff at the Pinawa hospital. In lieu of flowers, donations in John’s memory can be made to the Pinawa Hospital, Box 220, Pinawa, Mb., R0E 1L0 for the purchase of new equipment or the Womens’ Auxiliary at the hospital.

Offer Condolence for the family of John Stermscheg