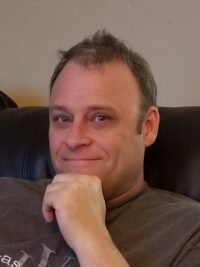 John was born on December 05th 1968 at the Women’s Hospital in Winnipeg, MB.  He was raised in Winnipeg and lived in the River Heights, Crescentwood communities.  He attended Rockwood Elementary School and graduated from Grant Park High School in June 1987.  While growing up he was active in various sports from a very young age. He played soccer through the community center.  He was an excellent skater and loved playing hockey.  In high school he played with the Winnipeg Blues and was invited to play in Europe.  John enjoyed motor cross racing and competed throughout the 80’s.  He was a good swimmer and swam as part of the Manta team in Winnipeg.

John will be remembered as a hardworking, fun, kind, loving and caring man.  His parents instilled him with a good work ethic that he carried with him throughout his life.  He had learned many skills throughout his life.  He would take on any work challenge to his best effort.  He was humble and would help others when he was asked. He held many types of work throughout his life.  At a young age he worked on a newspaper delivery route.  As a teenager he often watched his father working on things, fixing engines or anything mechanical.  John was keen to observe and picked up few skills such as learning how to change a tire, install new brakes, and oil changes.  These were some of the many independent skills he gained.  John worked as a delivery driver for Chicken Delight in his late teens.  He once shared a story about how he was in awe to deliver an order of food to a hotel and it was the New York Islanders hockey team.  In his early twenties he worked in various jobs in Winnipeg.  He did cable installation.  He worked at a lumber yard.  He worked as a truck driver with Hertz, to transport equipment on a trailer and made deliveries in Winnipeg and surrounding communities.  In his thirties he did restoration work with Penta Coatings and sometimes travelled out of province to work.  He took leave from working for a period of time due to his illness. He moved to Pinawa, mb and he returned to working when he was able and secured work at Tanco Mining Corporation in 2006.  He began as a sample prep and moved into the lab technician.  John worked on post secondary courses related to his position and completed his courses with excellent marks.  He wasn’t one to boast about it, he would smile and that was his way of being content with his accomplishments.

John enjoyed traveling when the opportunity came up.  His parents took them to the Netherlands when he was younger.  His family supported his travel for sports, hockey, tournaments.  In his adult life he would take us for summer road trips.  We went to Edmonton, Alta, Minneapolis, MN USA, and Grand Forks, ND USA. He also been to Las Vegas with Marge for vacation.  He attended a trip with his friends to Indianapolis, IN, USA to watch the Indy 500 car racing.

John loved his family very much and would tell us every day that he loved us.  He was a loving, funny and caring father. He always enjoyed spending time with his children, from movies with Ariel to fishing with Aiden to name a few. He would provide as much as he could to give the children things, if they wanted but he would tell them it would be a birthday or Christmas gift.  He knew how to make people laugh. He had a great sense of humor.  John wanted to be spent time with his family and friends as much as he can.  He enjoyed playing recreation sports when he able.

He enjoyed watching his favorite hockey team the Winnipeg Jets.  He loved going to see a Jets game and he was also content watching the game at home. He would often invite his friends over to watch a game.  John also liked to watch the Winnipeg Blue Bombers games.

The family would like to thank the Pinawa Hospital for the care they provided to John and to the Cancer Care Program, Dr.Bruneau and the nurses, palliative care team/home care nurses and Pinawa/ Pine Falls Ambulance, Beausejour Hospital.  Thank you to the friends, family and community members for the food and sending your condolences.  We will miss him so much. We will cherish the many good memories we have of him.

A Memorial Service will take place at Sobering Funeral Chapel, 1035 Park Avenue East, Beausejour, at 1:00 p.m. on Monday, August 16, 2021.  The family welcomes you to join them inside the chapel, which is limited to 200 patrons.  Please adhere to social distancing regulations and masks are strongly recommended.

A Livestream of the funeral service can be accessed through the WEBEX app on your mobile phone or visit www.webex.com on your PC.  Enter the Meeting Number: 25520831534 and Password: Bc2eSpnZ7x3 to view the livestream.

** Direct access to the WEBEX LIVESTREAM can be accessed HERE **

Offer Condolence for the family of John William Stam