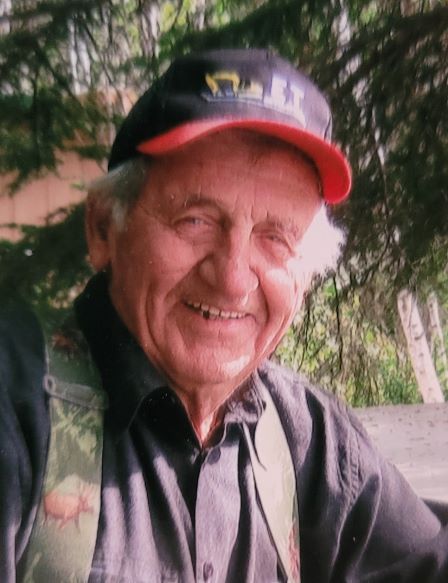 We lost a legend on June 1st.  “Archie” stopped talking and joined his wife, Vi, and beloved son Rheal.

Archie grew up in St. Pierre, Manitoba.  Leaving home at 14 to find work in Winnipeg, eventually ending up in Somerset where he began a career with Manitoba Hydro as a Lineman.  Somerset was where he met and married Viola Decosse.  The big city lights called to him and they moved with 5 children to Winnipeg in 1965, another special child to come in 1967.  The city life did not last long as the great outdoors called him to a new adventure in Grand Rapids.  Moving from the Lineman position to District Supervisor Archie worked for Manitoba Hydro for 37 years.  He then continued to work as an electrician, outfitter, and guide for many more years.  In 1992 it was time to move again, and they chose Lac du Bonnet as their new home.  “Toad Junction” became the new gathering place for family and friends.  There was always an open door to those who wanted to come and listen to Archie’s stories.

Fishing, Hunting, Trapping and Travelling were Archie’s passions.  He trapped until he was 85 and was highly involved with the Manitoba Trappers Association.  His love for nature and the outdoors was passed on to his children with camping and snowmobiling adventures, a fire and of course, a story or 2.  Archie, and Vi, loved to travel, trips to Africa, Europe, Hawaii, Jamaica, Mexico, the States and Canada just to mention a few.  His last, and fondest trips were to Costa Rica where he built his vacation home in 2015.

Archie was very involved in every community he lived in whether it be in the curling clubs, the wildlife or rod and gun club, the church or just about anything he could volunteer for.

The family would like to thank all the people who have cared for Archie over the years. We would especially like to thank Dr. Bruneau, Dr. Clovechok and all the staff of the Pinawa Hospital.  We don’t know what this community would do without you.  You are the best!

See you later, Bonsoir, Adios “One of the best story tellers of all time”

A Celebration of Life will be held in Archie’s honor on June 11th at 2:00 pm at the Lac du Bonnet Community Centre.

Offer Condolence for the family of Joseph Achille “Archie” Cinq-Mars