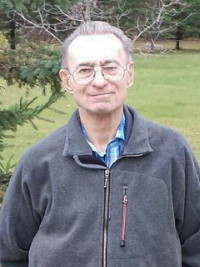 Joe passed away peacefully with his family by his side on Tuesday, October 31 ,2017 at Pinawa Hospital.

He was predeceased by his parents Anton and Bernece, his brothers Hillary and Johnny (in infancy), as well as half siblings Mary, Tina, Pauline, Steve, Paul, Olga, Peter, Ann, Mike and 2 sisters in childhood.

Joe was born in Pine Falls and raised in Thalberg and Brightstone.  He often joked he was related to anyone who drove through Thalberg.  Joe “Honey” met and married the love of his life, “Sugar”, in Pine Falls in 1959.  The family moved to follow work and some of the places they lived were Lac du Bonnet, Maple Ridge, BC and back to Lac du Bonnet.

Joe was a very proud man and everything he accomplished throughout his life was done so with great passion. He embraced life and enriched the lives of all around him. He did this in his own humble way, either on a personal level or while hosting many large family gatherings.

Being quick witted, “slightly” opinionated, and coupled with his sense of always being right, his characteristics usually made for some really interesting conversations, particularly when he came across another family member who shared in the Smyrski “stubborn” trait.

Joe enjoyed spending time outdoors, whether it was wood cutting, snowmobiling, fishing, hunting, or camping it was always planned with as many family members as possible.

Joe had an extremely good work ethic, which he has instilled in his children and grandchildren. He was always there whenever you needed him to fix whatever was broken, help renovate a house, or even build a few new ones over the years.

Joe started his working career very early in life as a young man hauling pulpwood by horse and sleigh. Later on, he delivered milk, followed by a career in drywalling, and building construction. A back operation required him to change careers and he became the parts man at Relay Auto in Lac du Bonnet, until he retired in 2004.

After retirement, Joe and Agnes took on one more job together. They were the Campground hosts at the Otter Falls campground in the Whiteshell Provincial Park for two summers.

After being diagnosed with Mesothelioma in 2013, Joe’s outlook on life never changed, and he was able to make two more trips to BC to visit family.

A special thank you to Dr. Bruneau, the staff at Pinawa Hospital, his home care providers and Cancer Care in Pinawa.

A Celebration of Joe’s life will be held on Saturday, November 4 at 11:00 a.m. in the Lac du Bonnet Legion Hall, Lac du Bonnet, MB.

Offer Condolence for the family of Joseph Smyrski