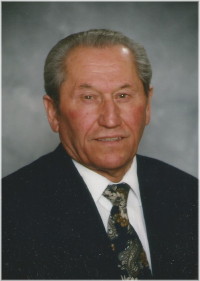 Joe passed away peacefully on Monday, August 14, 2017 at East Gate Lodge Personal Care Home at the age of 88.

Joe was the eldest child of John and Annie Tymko, of Allegra, MB in the R.M. of Brokenhead.  There he met, and then married the love of his life, Marion (nee Kruk), on October 29, 1955, and started their family a few years later.  They were happily married for more than 58 years until Marion’s passing in 2014.

Joe was predeceased recently by his sister Jean Tymko in March, 2016 and one brother in infancy.   He leaves to mourn, his children Allan, Kelly (Patti), and Brenda Wiedermann (Glenn).

He is also survived by his grandchildren Kurtis, Courtney, Danielle, Brandon and Nolan, all of whom were his pride and joy.

Joe was passionate about many things.  He was a Journeyman Carpenter of which he took great pride in his craft.  He also farmed and was very actively involved with the Holy Ghost Catholic Church, Knights of Columbus, and Club 50.  He loved to fish, ride his bicycle and play crib at the Senior Centre.

Many thanks to the staff at East Gate Lodge-Shamrock Unit, Betel Care Home and Beausejour Hospital as well as Dr. Van Rensburg for all the care and compassion they showed towards our father.

In lieu of flowers, donations may be made to Canadian Pulmonary Fibrosis Foundation, Beausejour Hospital or East Gate Lodge Personal Care Home.

Offer Condolence for the family of Joseph Tymko