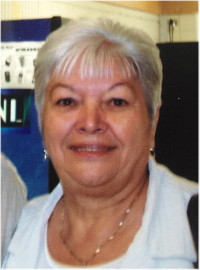 It is with heavy hearts we announce the passing of our wife, mother and grandmother on October 10, 2016.  She was surrounded by her family as we said goodbye.

She is predeceased by her parents Winnifred and Jack Sr., and her brother Jack Jr.

She will be lovingly remembered by her loving husband of 51 years Denis; her children Roger (Gail), Anita (Frank) and Richard (Lisa), as well as her seven grandchildren.  She also leaves to mourn her passing her sisters Gloria and Judy; as well she leaves numerous nieces, nephews and friends.

The family would like to thank the doctors and staff at St. Boniface Hospital Cancer Care for all their care and compassion.

In lieu of flowers, donations can be made to CancerCare Manitoba.