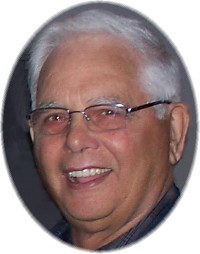 It is with great sadness that we announce the sudden peaceful passing of Julian on December 25, 2014 at the age of 85, at the Beausejour Hospital.

He was predeceased by his parents Victoria and Steven, his first wife Vicki, and his 11 siblings.

Julian was born and raised in the R.M. of Brokenhead, Manitoba.  In his late twenties he was an avid baseball player for a rural baseball league.  He farmed in his early years, and continued to farm right through to 1988.  While farming, Julian also worked in a local bush camp for Archie Trapp.  He finished his working life at Winnipeg Supply.  During his time there, Julian enjoyed hunting.  Later on in life, he took up fishing, bowling, curling, golfing, and mushroom and blueberry picking.  Julian would never miss out on serving blueberries and ice cream for dessert.

In 1998, Julian and Helen moved from Gull Lake to Beausejour, where they continued to have a well-manicured lawn.  Together Julian and Helen had a passion for gardening and yard work.  With the slightest dusting of snow, you would see Julian out on the driveway blowing away the snow with his leaf blower.

As per Julian’s wishes, cremation has taken place.  A Memorial Service will be held on Wednesday, December 31 at 11:00 a.m. at Sobering Funeral Chapel, 1035 Park Ave. E., Beausejour, Manitoba.

The family would like to thank Dr. Van Rensburg, Hospital staff and the Emergency responder staff, for all their care and compassion.

In lieu of flowers, should friends desire, donations may be made to Kidney Foundation of Canada, Unit 1-452 Dovercourt Dr., Winnipeg, MB R3Y 2K8.

Offer Condolence for the family of Julian Edward Trojanowski