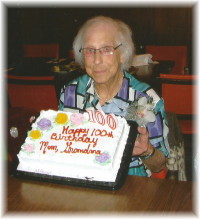 Kay passed away peacefully on Sunday, November 23, 2014 at the Beausejour Hospital at the age of 101.  Kay was born in Brokenhead to parents Mike and Lena Molinski.

Kay and Edward were married on October 8, 1933 and farmed in Ladywood for 32 years.  They retired to Beausejour in 1964.

Funeral Mass will be celebrated at 11:00 a.m. on Friday, November 28 at St. Mary Roman Catholic Church in Beausejour with viewing from 9:30a.m. -10:15 a.m.  Interment to follow in the Parish Cemetery.

In lieu of flowers, donations may be made to the Beausejour Hospital TV Fund, Box 1614, Beausejour, MB R0E 0C0.

Offer Condolence for the family of Kay Weselak