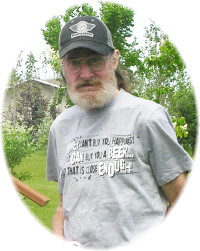 Ken is survived by his children; Kenneth (Sharon) Nelson, Bruce Nelson, Allan (Sue) Nelson and Melodie (Darin) Meakin; his brothers Don, Dennis, Danny, and Barry; his sisters Lillian, Darlene and Kim and their families.  He was predeceased by his father Bjorn Lynburg, mother Grace Evelyn Nelson and his brother Lynn Nelson.

Ken was born in Winnipeg on January 14, 1939.  He and his family moved from Dryden, ON to Lac du Bonnet in 1965.  He retired from The Leader where he worked as a printer.

Ken was an extremely friendly soul and enjoyed a good game of crib.  Ken kept a sharp mind and always had a story or a joke waiting to be told.  He loved his children and family.  He will be deeply missed by all who knew him.

A Memorial Service will be held at 2:00 p.m. on Sunday, October 4 at The Pioneer Club in Lac du Bonnet.  A private family internment will take place at a later date.  In lieu of flowers, donations in Ken’s name may be made to a charity of your choice.

Offer Condolence for the family of Kenneth (Ken) Nelson