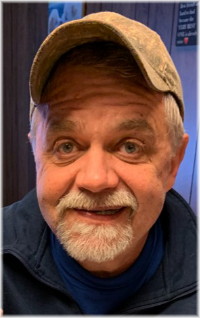 It is with great sadness and broken hearts to announce the unexpected passing of Kevin at the young age of 59.

He will be lovingly remembered by the love of his life and soulmate Karen; he will be missed dearly by his fur babies Xena and Stormie; his loving sister Melanie (Lynn) Fraser of Winnipeg, his mother in law and father in law Dianne and Ivan Johannson of Lundar, brother in law Kevin (Mindy), nephews Thomas (Carla), Brent and Randal, very special great nephew Ivar, niece Chelsi, all of whom he adored. All of his aunts, uncles, cousins and friends who all held a special place in his heart and two special little buddies Julian and Danny who both meant the world to Kevin.

Kevin was predeceased by his parents Don (2006) and Judy (2017), his grandparents, his best friend Raymond Roberts and his fur babies Callie and Ray.

Kevin was born in Whitemouth, Mb and lived in several places throughout Mb while growing up and during his time working for Mb Hydro. Kevin met Karen in 2008. They moved to Lac du Bonnet in 2009 and married August 13, 2011. Kevin loved the CFL and his team was the Saskatchewan Roughriders and made sure everyone knew it, especially when they won a game. Kevin enjoyed vacations with Karen and was anxiously waiting to be able to start travelling again. Kevin loved his family and extended family. He always looked forward to the Boxing Day gatherings. He even dressed up as Santa one year and had a blast with the kids.

A special thank you to Auntie Lois for helping out when Kevin was in the hospital and for being there for Karen. We love you!!

There will be a celebration of life at a later date. Because of Kevin’s love for animals, donations may be made to a pet rescue/shelter of your choice.

Forever and Always my baby!

“I LOVE YOU MORE”

Offer Condolence for the family of Kevin Donald Cowell