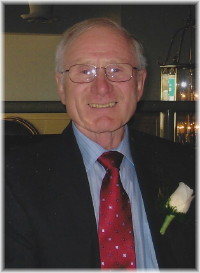 After a four month struggle with cancer we are so sad to announce the passing of our dear husband, father, grandfather and great grandfather on October 6, 2020. He died peacefully at his home with family by his side.

He was predeceased by his parents and two sisters.

Kurt was born in Schoenbruck, Westpreuzen (Germany) and immigrated to Canada with his family in 1954. When they arrived in Winnipeg they joined McDermot Ave., Baptist Church, a large vibrant German immigrant congregation. Shortly after his arrival in Winnipeg, he met his bride to be, Anneliese, and they were married in 1958.

Kurt was a very industrious man and began working in the commercial painting business. After a few years he became the owner of Globe painting and decorating until his retirement in 2000.

Dad’s favourite past time was spending time with his horses and putting up hay for feed. Time on the tractor was pure joy.

Dad had a deep faith in the Lord and was actively involved in their church as choir and band director, elder, deacon, trustee and various other positions.

The manner in which dad lived his life and conducted himself spoke to and influenced many people. He will be greatly missed.

Due to Covid-19 and provincial regulations, the family is having a private service with interment in Sunnyside Cemetery.

In lieu of flowers, if friends and family so desire, donations may be made to Camp Nutimik Baptist Camp.

Offer Condolence for the family of Kurt Reinhold Bakus